The Sphero Bolt, to this day, is arguably the most sophisticated sphere to this date. What makes its latest generation more unique is the fact that it serves two functions. It acts as an educational tool, but at the same time, it also serves the function of a toy, which eventually helps a great deal in developing the interest of your child towards STEM.

If you are curious about hardware, then you must know that it looks quite similar to Sphero SPRK+, and by the looks of it, it is a tennis ball-sized sphere weighted in a way that it stays upright when rolling. It is made of transparent plastic which lets you see the insides of the sphere. This is also done to let you see all the various gizmos and sensors which drive Bolt, but also to take advantage of one of its cool features i.e 8×8 programmable LED light display. This LED can be used to display different colors, show scrolling texts, play animations, adding a new layer to programs, etc. 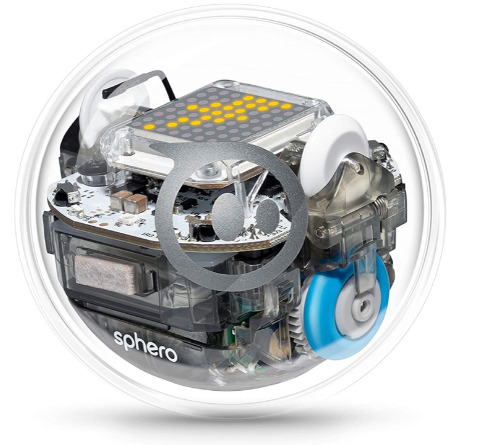 Led Sensors: That being said, it is not the only feature that the sphere bolt offers. The all-new sphere bolt also comes with the addition of two important new sensors. Out of those two sensors, the first one is a light sensor, which helps you a great deal to create programs to react to light levels. And also triggers an action in response to it such as it lights up the LED matrix when the room goes dark. The second sensor is an infrared sensor, which is used by the bolt to communicate with other bolts. But, the thing is you can’t taste it yourself since you will most likely only have one device

IR Feature: On top of that, the company also claims that IR features will most likely be expanded significantly in the coming months. The intention is to make complex swarm robotics easy for people who can manage to get enough bolts in one place together. Also, the bolt has a strong build quality and is designed last, and survives plenty of bumps and bruises without any damage. Instead, an animation is projected when it hits the floor.

Another important component of the sphero bolt is its battery. The battery has been considerably improved and can last for around two hours on a single charge. This makes it convenient to use for extended sessions or the teachers since they have to use it for different classes.

Sphero Edu App: Coming to the software, sphero has entirely revamped its software considering the launch of the bolt with a Sphero Edu app and a new sphero play app. Both of these apps are designed to work with bolt alongside SPRK+ and Sphero mini. The play app is for those who intend to enjoy the bolt just as a toy. There are a few different ways through which you can drive the bolt. You can either drive the bolt via touchscreen or tilt controls. There are maný unique options available as well such as Scream, but it is contingent on the amount of noise present in the surroundings, or KICK ( which plays a few football sound effects and enables you to flick across the screen to curve the ball ). Not only this, but you will also get three games to play with sphero Bolts, which are mostly in line with previous sphero devices. The games are top-down spaceship shooter, obstacle-based runner, and spin the barriers. All of these games are fun to play and use some of the new LED matrices to change colors or display animations. 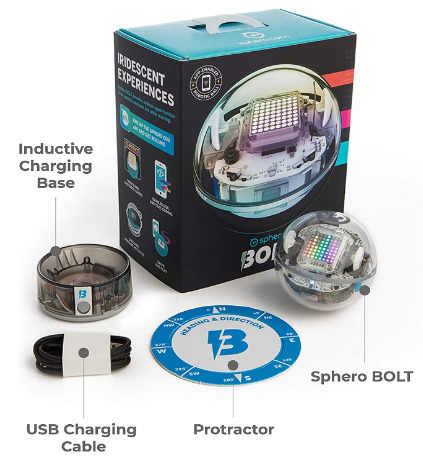 You would love to read Ring Spotlight Cam Review: A Complete Walkthrough

How does the Sphero Bolt App work?

The EDU app includes everything you require to code your mini-programs using the sphero bolt. The app has been around for some time now and is designed to teach coding, be it block-based or through javascript. The app enables you to program animations, actions, games that use sphero bolt. The Edu app also lets you utilize every feature of the Bolt, which includes matrix, light sensor, IR sensor, LEDs, and much more. As a coding tool, there is no second opinion about the fact that sphero bolt is one of the best apps for kids to learn coding, but it is to remember that it should only be used for beginners, for someone aware of the basics, the bolt won’t be of any use.

Things to know before buying one:

Pricing: The price for a sphero bolt-on amazon currently stands at around 149$. This may appear to you as extravagant considering it is just a toy, but truth be told, it is not just a toy. That being said, you should only buy it if you plan to use it for a longer period and try to engage your child with the educational coding side of the device.

Having said all that, a sphero bolt is probably one of the most feasible options you may get for yourself. But, individual choices do vary, which is why whichever one you buy, make sure you make an informed decision

What is a Sphero bolt?

Sphero Bolt is an educational robot toy, engineered very smartly and creatively for people who love to do coding.

The hardware is one of its own programmable robots that is tough, waterproof, and very educational because it teaches children how to do coding using the mobile application.

Is Sphero Bolt worth buying?

If your children are keen on learning coding and programming, you must invest in this robot as it can be both fun and educational.

For the price of a few bucks, this robot has a lot of features that even a high-end programming robot cannot offer.

Can you learn programming through mobile?

If you download the sphero EDU  app, you can integrate Sphero bolt with it and learn to program on your android or iOS phone.